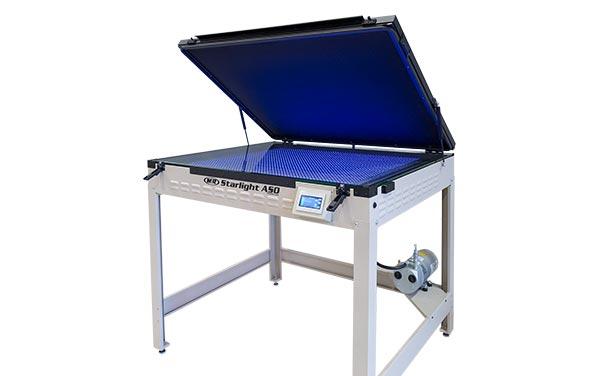 Starlight ASO can be stand-mounted or used on a table top. It’s ideal for conventional exposures, and an optional CTS retrofit kit turns the Starlight ASO into a CTS (computer-to-screen) UV LED screen exposure system. Starlight ASO's UV LEDs save energy costs, reduce screen exposure time, speed up production, and operate at far lower temperatures than metal-halide lamps. And, unlike expensive metal-halide bulbs that require replacement every year or two, Starlight ASO's UV LED light source can last for decades. In fact, M&R is so confident in the longevity of Starlight ASO's screen-exposure LEDs that it backs them with a limited lifetime warranty against failure in normal use. And the high density of M&R’s screen-exposure LEDs (a total of 6840) provides the finest detail, the most uniform coverage, and the quickest exposures available. M&R’s Starlight ASOs have more than three times as many LEDs per square inch as some competing products.

Starlight ASO’s sophisticated digital touchscreen controller automates screen exposures. All the operator needs to do is select the appropriate exposure preset and press START. The entire process, including vacuum, exposure, and shutdown, takes place without further operator involvement. Starlight ASO allows the operator to walk away after initiating the process because Starlight ASO ensures that exposures will not begin until proper vacuum has been reached—and vacuum and exposure LEDs will shut off automatically upon completion of exposure. Vacuum and exposure times can be set between 0.1 and 999.9 seconds. And Starlight ASO’s Job Recall™ speeds processing and increases productivity by enabling operators to save and recall up to 24 vacuum and exposure profiles—and identify each with a unique name or description.

Starlight ASOs quickly expose direct, capillary, and indirect emulsions. They work particularly fast on photopolymer emulsions, which can be exposed in as little as three to five seconds (results will vary based on emulsion type and thickness). Starlight ASO UV LED screen exposure units can be located in areas housing unexposed screens because the ultraviolet light source and vacuum frame are enclosed, and the screen exposure lamp can't be turned on while the blanket frame is open. Starlight ASOs also incorporate several strips of yellow, non-exposing LED inspection lights for convenient setup. The Starlight ASO is capable of exposing screen frames up to 79 x 102 cm (31" x 40"). The Starlight ASO is compatible with most sizes of M&R’s Tri-Loc Registration System.

Starlight ASO will debut at SGIA 2017 in New Orleans. A downloadable product brochure in PDF format will be available soon after the show.