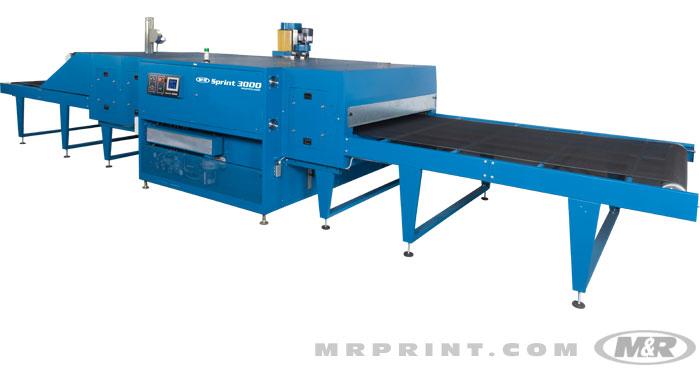 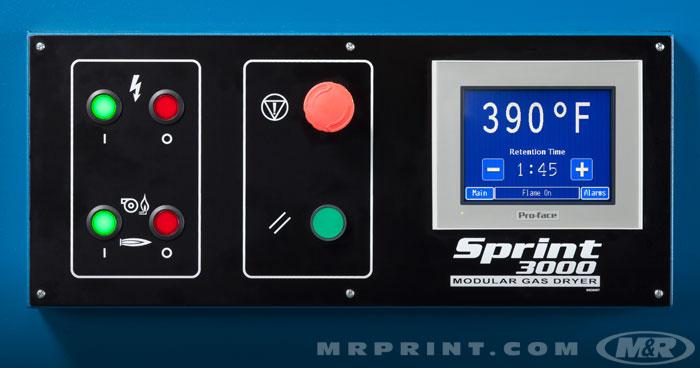 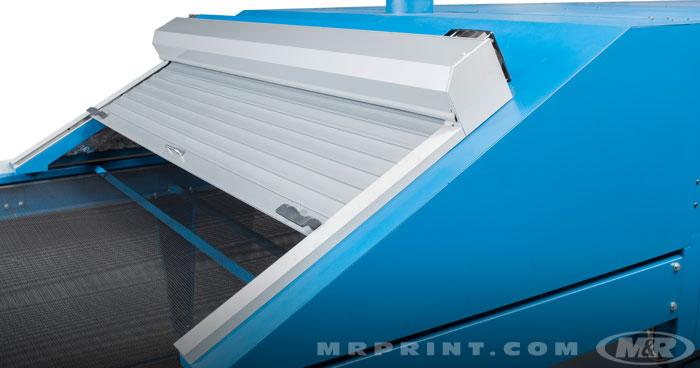 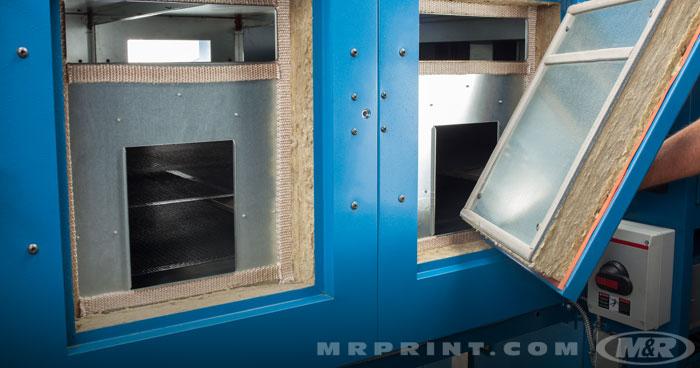 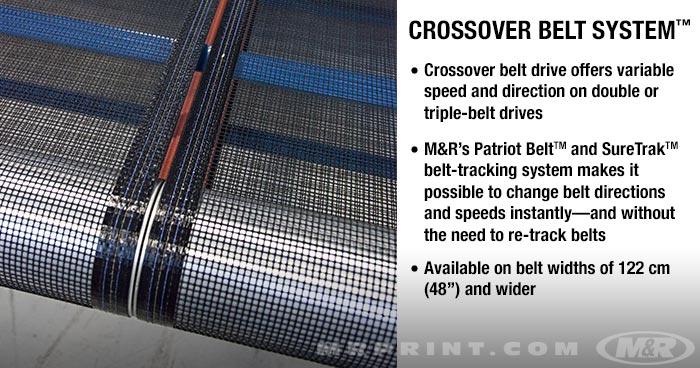 Sprint 3000 is the most innovative and dependable gas dryer in the industry. Sprint 3000’s large color touchscreen control center features icon-based labeling and can display information and commands in multiple languages. It also displays real-time performance data, including temperature, temperature history, and output from the included temperature probe, which can be used to track substrate temperature as it passes through the dryer.

M&R’s AccuSet™ retention-time belt-speed controller makes it easy to duplicate settings and eliminates the need to convert feet per minute into the time substrates will spend in the heat chamber (U.S. Patent Pending: SN 13967564). And M&R’s DynaBelt™ dynamic belt-speed controller shortens warmup and cooldown times and reduces overall energy consumption by automatically setting the conveyor belt to its minimum speed upon dryer startup and to its maximum speed upon dryer shutdown (U.S. Patent Pending: SN 15251547). In addition, raising or lowering the dryer temperature by more than 3° C (5° F) during operation results in DynaBelt™ changing the belt speed to maximum (when raising) or minimum (when lowering) until the desired temperature is attained.

M&R’s optional Crossover™ Belt System (U.S. Patent Pending: SN 15264277), with independently variable speeds and instant change of direction on double or triple-belt drives, is a game-changing approach to split-belt curing. Each belt has its own flexible bead and machined groove to reduce the gap between belts to a mere 0.95 cm (3/8”), and the AccuSet speed settings are so precise that two or three belts running in the same direction at the same set speed can be easily used as one wide belt. In fact, the Crossover Belt System delivers such exacting control that one belt in a single-chamber, single-burner system can be used to cure traditional plastisol while the other belt can be used for curing water-based inks or DTG apparel. That simply can’t be done easily with unsophisticated conventional split-belt dryers.

Other features include high-capacity circulation and exhaust blowers; an integrated roll-down outfeed hood with exhaust blower; adjustable entry and exit openings; and cleanout access panels on the sides of the burner sections and drone modules to simplify cleaning and maintenance. And M&R’s Maintenance Minder™ System alerts operators when scheduled maintenance is due.

Available in liquid propane (LP) or Natural Gas (NG), Sprint 3000 dryers use high-performance burners. The burner system includes its own combustion air blower, and a high-volume forced air system quickly brings the dryer to the desired temperature. Process temperatures and set temperatures are controlled digitally. A fuzzy-logic controller keeps chamber heat within one degree of target temperature. A tower light shows when temperatures are within user-set parameters and issues visible and audible alarms when readings fall outside those settings. An automatic shutdown sequence keeps the blower and belt running until the chamber has cooled.

Sprint 3000 dryers are available in a wide variety of configurations, belt widths, and chamber lengths, including multi-burner models of 12.2 meters (40 feet) or more for slow-curing inks and a 6.1 meter (20 foot) heat chamber that requires only a single burner. Sprint 3000 dryers have the highest production capacity in their class and are the most energy efficient. CoolSkin™ thermal insulation prevents heat from migrating into the workplace and leaves dryer skin cool to the touch. Sprint 3000 Series is simply the world’s most sought after line of dryers.
For over 30 years M&R has helped countless screen printers realize their dreams by supplying them with innovative screen and digital printing products that stand the test of time. We have the right solutions, from pre-press to product finishing, for shops of all sizes. M&R equipment is designed and built with a commitment to quality, durability, and innovation, and is backed by unrivaled 24-hour service and support. With efficient systems integration from start to finish, it’s no surprise that year after year, print after print, M&R’s hard-working equipment is the choice of professional printers around the world.
Request a Quote

Explore our network of sales representatives

We're proud to be providers of the finest service and support in the screen printing industry.

You need to login in order to submit a review.

No account? No problem at all - It takes a minute! Your information will be on file to save you time, next time. 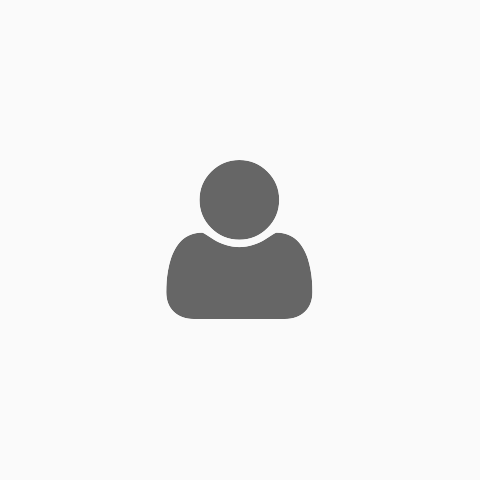 •Monday, Jan 16, 2017
Michael Dixon, Production Manager•Awesome Merchandise•Leeds, UNITED KINGDOM
The Sprint 3000 is superb and we are really, really happy with it. We've got the recipes dialed in for our inks now and it's running great. We have noticed improvements in the finish on our plastisols, too. They seem to be coming through much softer. Assuming it's because we are much more efficiently curing than with the electric curers!

We remain the worlds largest manufacturer of screen printing equipment because weve held to the standards M&R was founded on: Innovative Design, Quality Products, and Unmatched Customer Support. With sales associates, distributors, and technicians in over 40 countries on six continents, we have the largest network of sales and support in the industry. And our technical support is available 24 hours a day, every day of the year. Wherever you are, whatever you need, well be there for you.

Where to Buy Service & Support